Episode 23: Summer eatin’, having a blast…

It’s summer! And aside from having songs from 70s movies that were set in the 50s stuck in our heads, we can’t stop thinking about all the fantastic summer foods we love.

So without further ado, let’s dive right into all the fantastic summer foods Japan has to offer! Eggplant can be found grilled, steamed with miso glaze, in vegetable curries, and pickled in tsukemono Musk melon. The outside looks like cantaloupe, but the inside is yellower. It has a very distinct flavor (and it’s pricy – $100/piece!) Many melon-flavored things can be found in Japan, such as Hi-Chew, ice cream, and sodas

Watermelon – just like here in the US, watermelon is a popular summer fruit in Japan (though it’s far more expensive there!) Pepsi will be offering a Salty Watermelon-flavored Pepsi starting this week (July 24th)… if any of our listeners are in Japan right now, we’d love it if you can try it and let us know how it is! (We’re so disappointed we’re missing it. 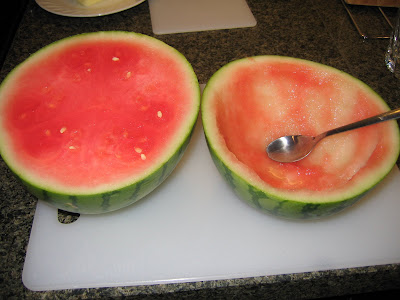 You can also find watermelons in all sorts of shapes, like cubes, hearts, pyramids…

Suica wari is a popular watermelon splitting game… each person takes turns getting blindfolded and taking a swing at the watermelon with a stick (kind of like a piñata)… whomever breaks the watermelon open wins, and then everyone shares the watermelon. (If any of you do this, we want video!) Hiyashi chuka or hiyashi udon – chilled chuka (ramen) noodles or chilled udon noodles. These are different from chilled somen because they’re served with their toppings on top, instead of on the side. Zaru soba – soba (buckwheat noodles) served on a “zaru” (a woven bamboo plate) (By the way, buckwheat is gluten-free, BUT most soba is made with a little wheat flour so it isn’t gluten-free. “Ni-hachi” refers to noodles that are made with two parts wheat flour and eight parts buckwheat flour. “Ju-wari” or “to-wari” soba refer to 100% buckwheat soba.) Unagi – eel that has been skinned, butterflied, steamed, grilled, then topped with eel sauce. It’s eaten during summer because they believe it gives you stamina to get you through the hot, muggy days of summer.

Edamame – green soybeans, still in their pods, boiled and then tossed with coarse sea salt What Japanese summer foods have you had this summer? What are some of your favorites, or which do you want to try?